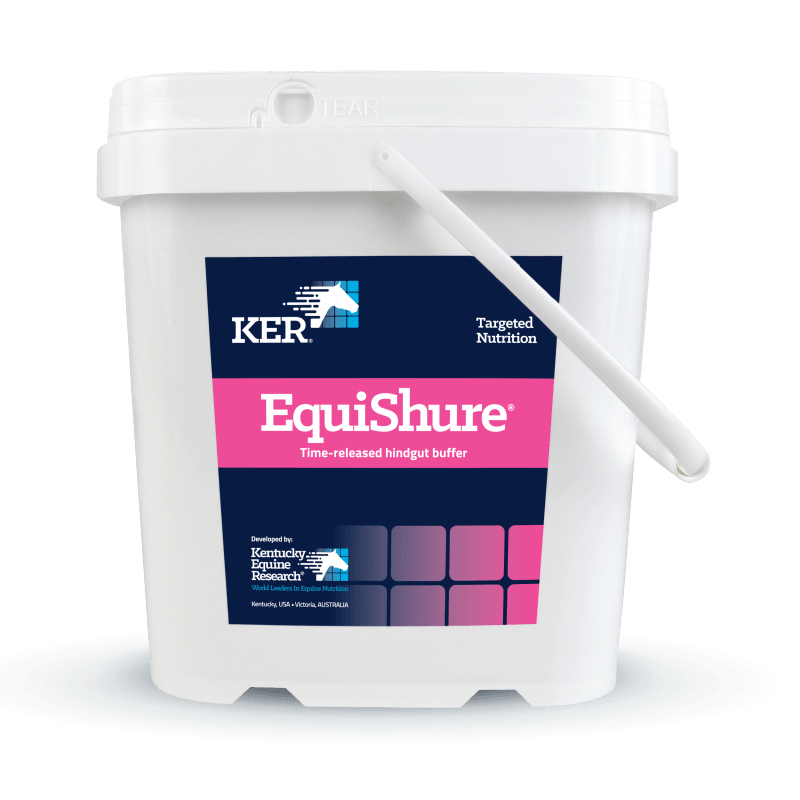 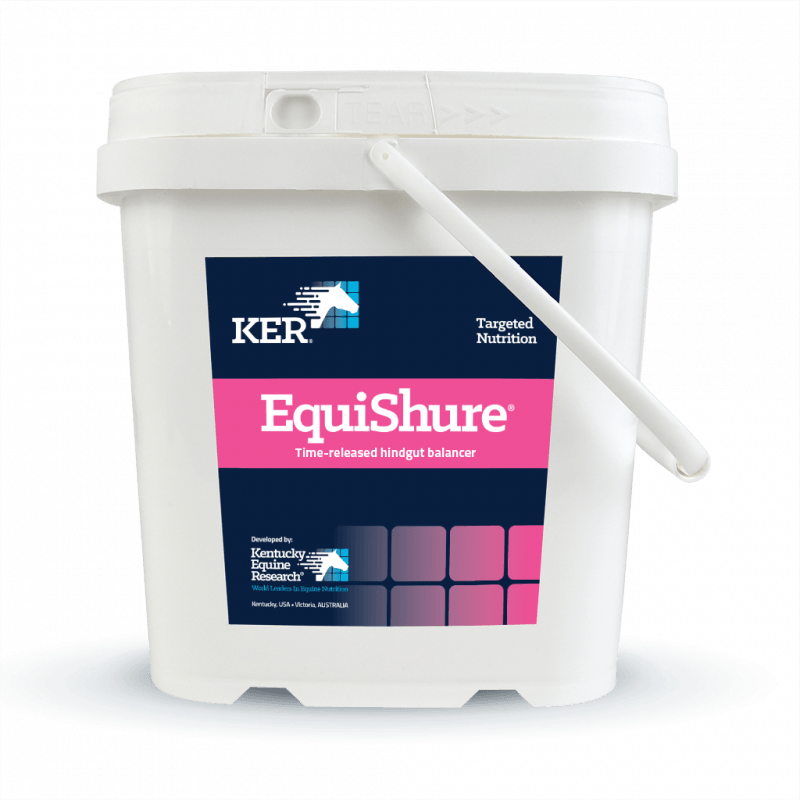 EquiShure® is a time-released buffer targeting the hindgut. Research supports the use of a hindgut buffer in cases of high grain and high fructan intake. Up to 70% of the horse’s energy is derived from fermentation in the hindgut. The pH of the hindgut varies as bacterial populations increase and decrease in response to dietary modifications. An acidic shift, which can be caused by carbohydrate-rich meals, favors the growth of acid-loving bacteria, while other microbes die in the same conditions.

Changes in the pH of the hindgut due to alterations in the microbial populations and acid profiles cause a condition known as subclinical acidosis, which can put affected horses at a higher than normal risk for colic and laminitis. Other signs of subclinical acidosis include decreased feed intake or complete inappetence in severe cases, mild to moderate colic signs of unexplained origin, poor feed efficiency and subsequent weight loss, loss of performance, and development of certain vices such as wood chewing, weaving, and stall walking. 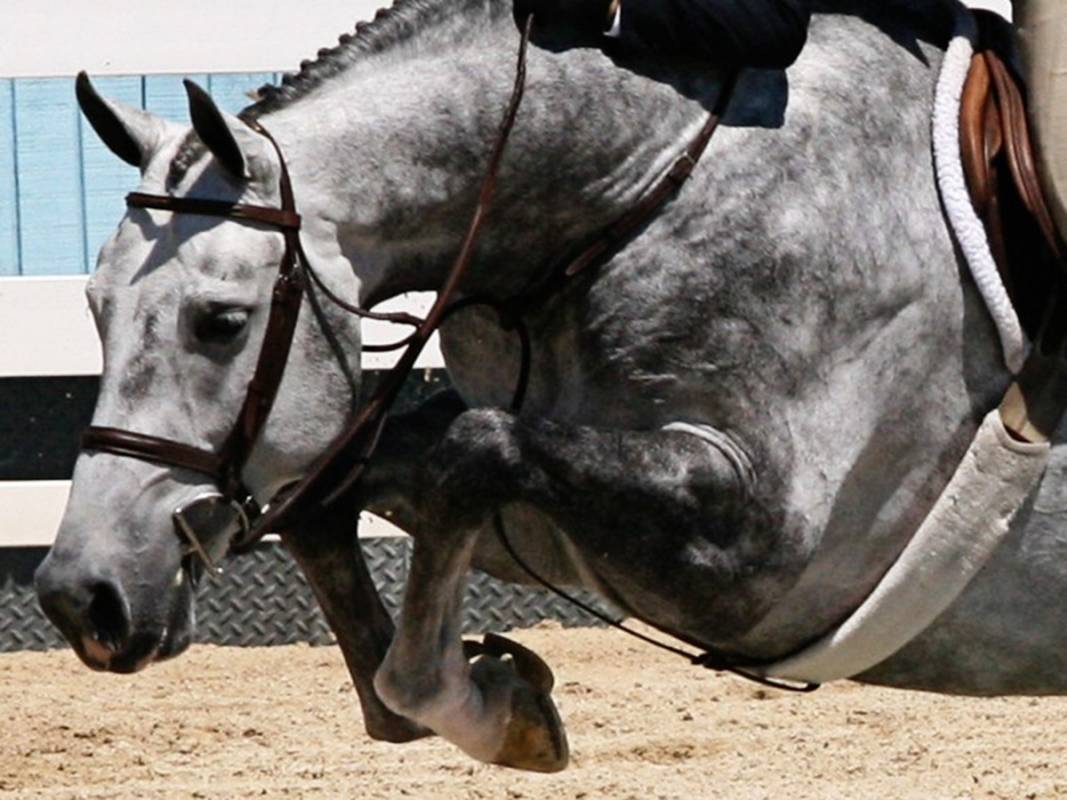 “In the world of equine sports medicine, the efficiency of the gastrointestinal tract is crucial to success. We routinely use EquiShure for horses that are prone to colic, weight loss, or show signs of digestive upset.” 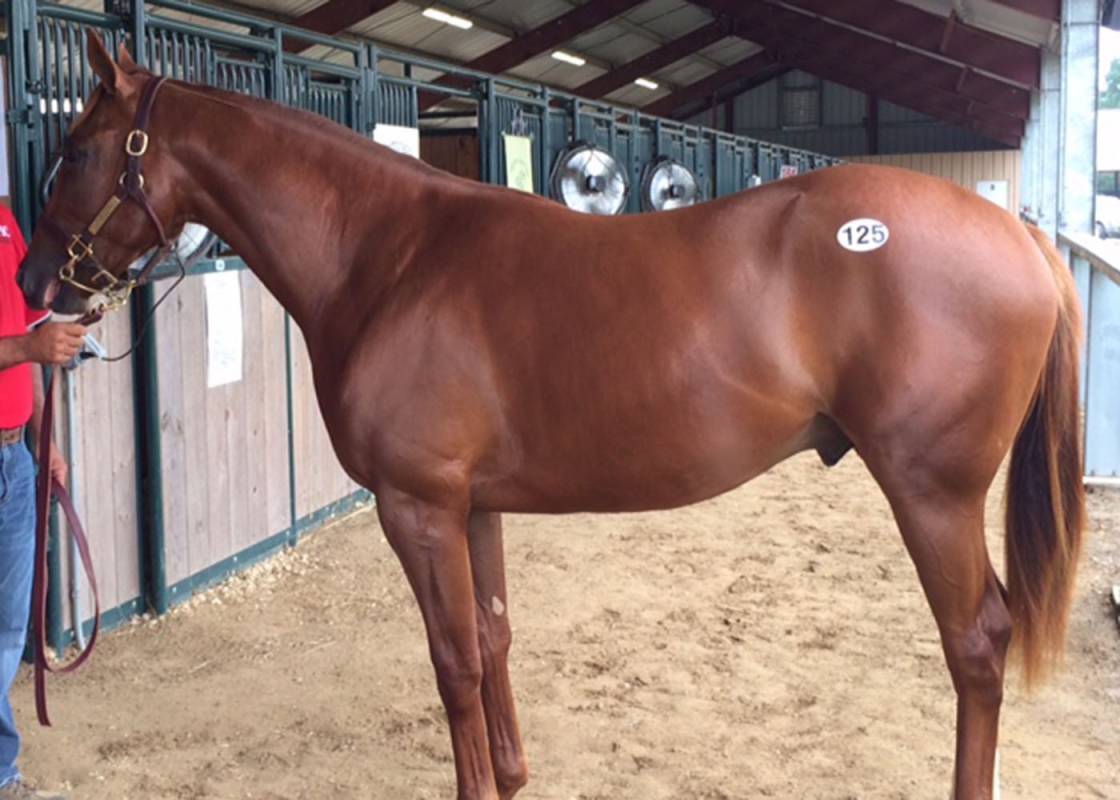 “My favorite product is EquiShure. Less chance of colic or weight loss, and a great gastrointestinal tract ensures us a greater opportunity to maximize our bloodstock in the sales ring and on the track.” 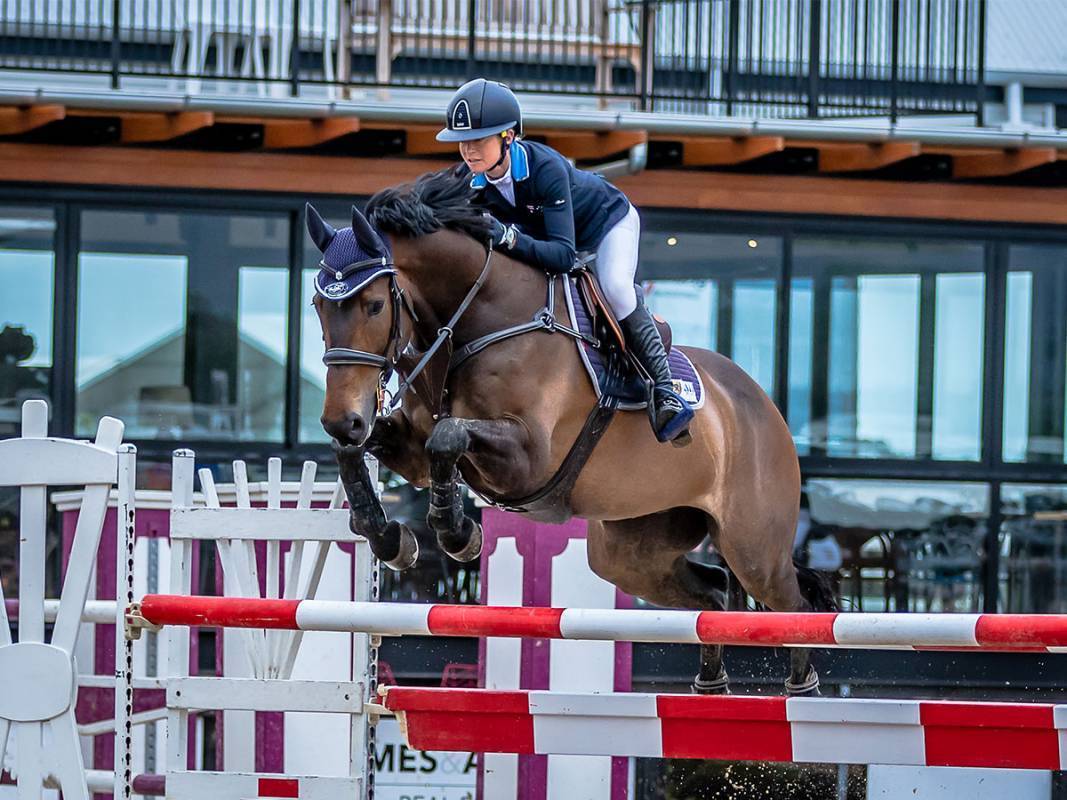 “I use EquiShure on all my competition team and, as a result, have actually reduced the amount of feed the horses require to look and feel amazing! I’ve seen long-term digestive upsets resolved within a week of feeding EquiShure, and I feel it’s essential considering the workload, travel, and competition stress my horses are under. They all feel super, eat well, and perform well.” 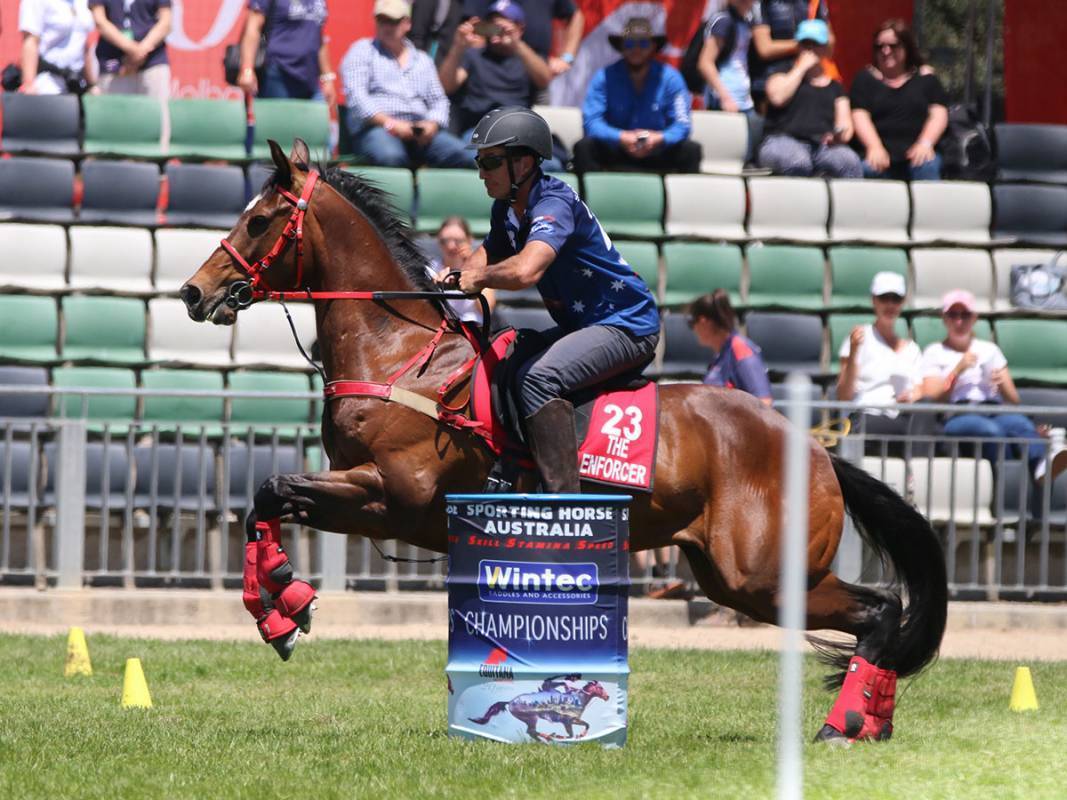 “EquiShure is an essential part of my feeding regime. Our horses experience huge amounts of stress when racing and training. Being able to maintain normal hindgut function during stress has helped reduce behavioral issues with them because they’re more comfortable.”

EquiShure®promotes normal digestive function by aiding in the maintenance of an optimal hindgut environment and is designed for horses suspected of suffering from or that are at risk of developing hindgut acidosis.

Many horses have hindgut disturbances and EquiShure’s unique encapsulation technology ensures targeted release directly in the hindgut. The demands placed on horses, as both athletes and breeding animals, dictate that substantial quantities of energy–rich feeds be consumed. Disturbances in the normal hindgut environment are thought to result from overconsumption of either high–starch concentrates or pasture grasses rich in fructans (sugars).

Hindgut acidosis leads to changes in the bacterial population of the hindgut, digestive disturbances, and reduced digestive efficiency. EquiShure supplies a time-released balancer to neutralise the acid and help maintain a stable hindgut environment, which encourages proper digestion and absorption of nutrients.

“I use EquiShure on all my competition team and, as a result, have actually reduced the amount of feed the horses require to look and feel amazing! I’ve seen long-term digestive upsets resolved within a week of feeding EquiShure, and I feel it’s essential considering the workload, travel, and competition stress my horses are under. They all feel super, eat well, and perform well.” 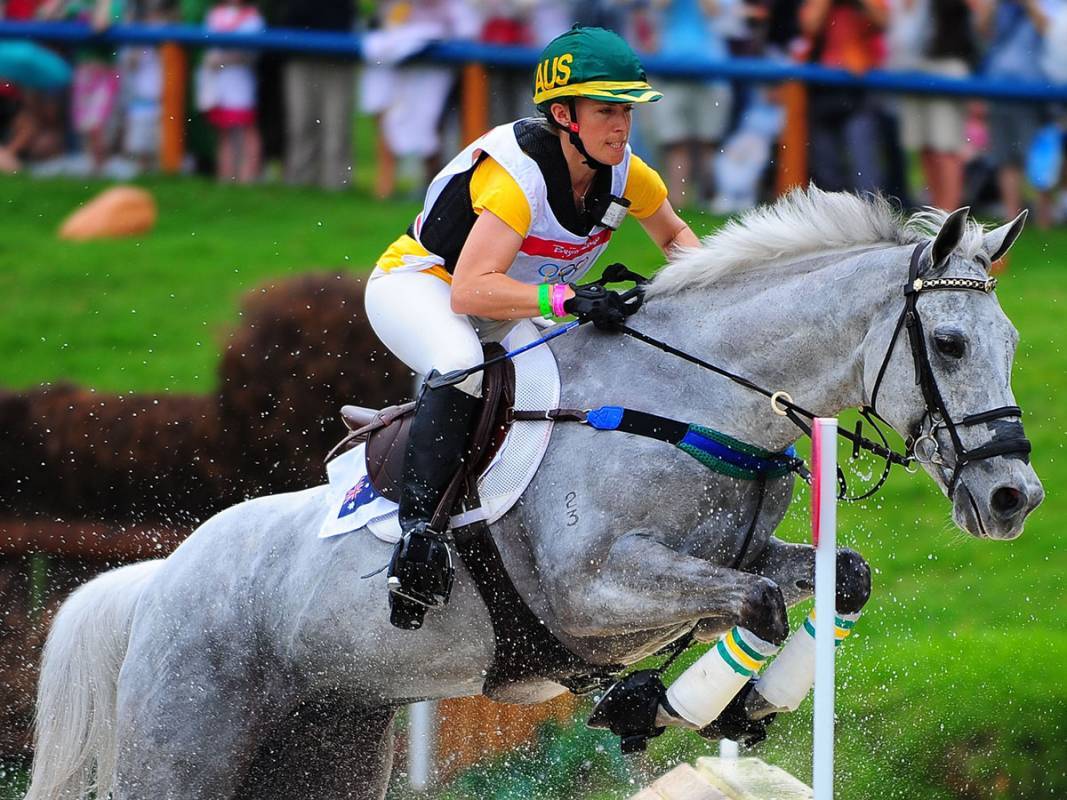 “When stress levels rise, feed isn’t always eaten or digested as well as it needs to be. EquiShure is one of the best products to ensure all of my feeding and management efforts aren’t wasted, and makes the horses feel so much better!” 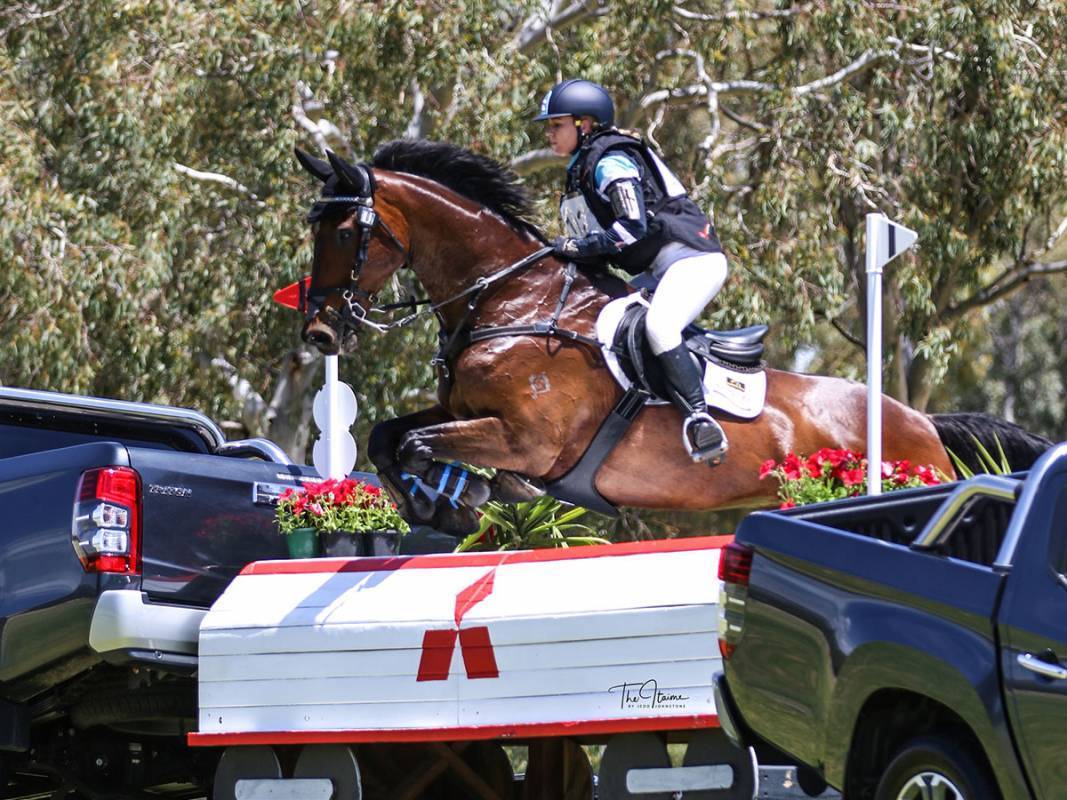 “I use EquiShure on all my horses. It helps keep them more relaxed and more responsive to leg aids. There is nothing else like it on the market.”

“EquiShure is an essential part of my feeding regime. Our horses experience huge amounts of stress when racing and training. Being able to maintain normal hindgut function during stress has helped reduce behavioural issues with them because they’re more comfortable.”

EquiShure is recommended for horses:

Cause of Subclinical Acidosis

One of the primary signs of subclinical acidosis is inappetence or decreased appetite. A horse is often reported to be “off his feed.” Because the hindgut is overwhelmed with lactic acid when a horse is experiencing acidosis, the intestinal lining becomes inflamed and irritated, causing the horse discomfort. The irritation may be severe enough to induce behavior characteristic of colic. Furthermore and perhaps most detrimental to equine athletes is a reduction of feed efficiency. Long-term exposure of the intestinal lining to a low-pH environment may negatively affect the absorptive capacities of these structures, limiting the amount of energy available for performance.

Research trials at Kentucky Equine Research (KER) were designed to test the efficacy of EquiShure® on hindgut acidosis in horses fed a high-grain ration. Fecal examination indicated that nonsupplemented horses had decreased fecal pH after feeding when compared to horses supplemented with EquiShure hindgut buffer (Figure 1). In addition, EquiShure supplemented horses had significantly lower fecal lactate concentrations, suggesting that lactate was being used by lactic-acid-utilizing bacteria to produce VFA. The VFA are subsequently absorbed by the intestine and are metabolized as an energy source in the liver. These significant results suggest that EquiShure prevented the decrease in pH associated with rapid starch and sugar fermentation after a large grain meal, enabling lactate-utilizing bacteria to thrive and convert lactate into VFA.

Subclinical acidosis can also be caused by pasture grasses rich in fructan. Microbial digestion of fructans results in production of VFA and lactic acid similar to cereal grain digestion in the hindgut. As with large amounts of grain, high fructan intakes overwhelm the hindgut resulting in rapid fermentation, accumulation of lactic acid, and a deleterious decrease in pH. KER therefore tested the efficacy of EquiShure against a challenge of fructan. Results showed that EquiShure-supplemented horses had less fecal lactate when compared to control horses (Figure 2), which, like in the grain study, indicates that lactate is being converted into VFA by lactic-acid-utilizing bacteria. However, both groups of horses exhibited decreased fecal pH. In control horses, both lactic acid and VFA contributed to the acidic conditions, whereas in EquiShure-treated horses, most of the lactic acid was being utilized. Low pH as the result of VFA is less detrimental to hindgut function compared with lactate, which is a much stronger acid. 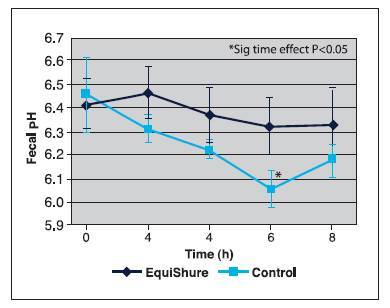 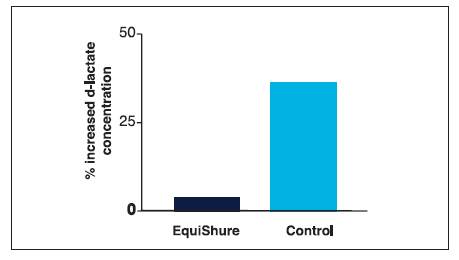 Another study demonstrated the efficacy of EquiShure given to horses that had been denied access to pasture (for example, due to injury-related stall rest). Horses that had not been turned out on pasture for several weeks were given 24-hour free-choice access to fall pasture. One group of horses was given EquiShure for 1 week prior to turnout and another group served as controls and was given no buffer. Initial pH readings revealed a moderate decrease in pH despite the buffer, but an analysis of VFA proved that the drop in pH was associated with increased VFA production; therefore more were being produced and available to the horse as energy sources (Figure 3). Additional analysis demonstrated that lactic acid was greater in the control group vs. the EquiShure-fed group, which meant EquiShure was effective and the hindgut was functioning optimally (Figure 4). 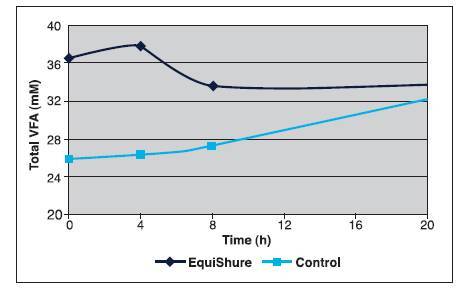 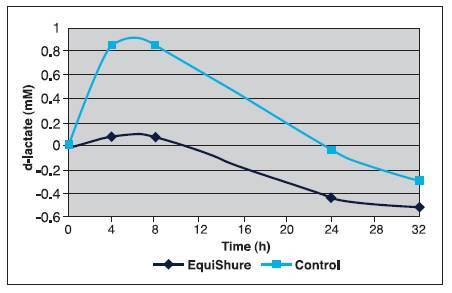 A time-released buffer helps moderate gut conditions by preventing the drastic drop in pH associated with high lactate production and supports lactic-acid-utilizing bacteria to enhance the natural production of VFA from starch and cellulose. While VFA are weak acids and will reduce pH, the dramatic effects of lactic acidosis are moderated and the associated problems attenuated by the time-released buffer EquiShure.

In racehorses, we recommend stopping this product 24 hours prior to racing. Why?

EquiShure is a registered trademark of Balchem Corporation.

Top–dress EquiShure on feed. Feed 30-150g (1-5 scoops) daily according to the horse’s size and diet. For best results, divide the amount equally among feedings.

Use table below to determine recommended daily amount based on horse’s grain intake, forage source, and weight. 1 scoop = 30 g.

EquiShure can be used in racehorses. Its use is covered by the ‘Clear Day rule’ in the Australian Rules of Racing for the use of alkalinizing agents. We recommend stopping this product 24 hours prior to racing.

EquiShure is a registered trademark of Balchem Corporation. 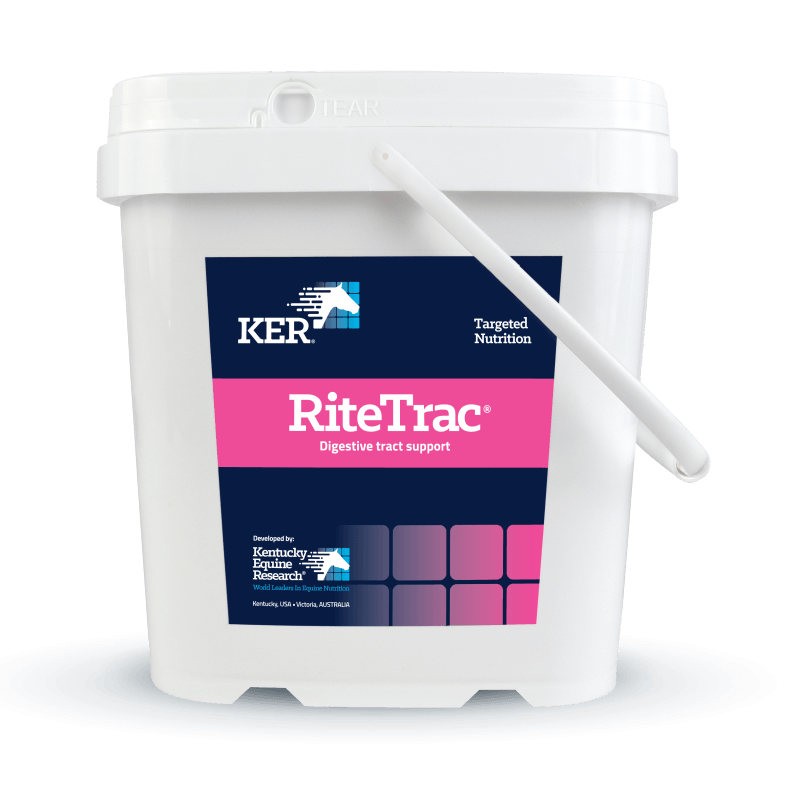 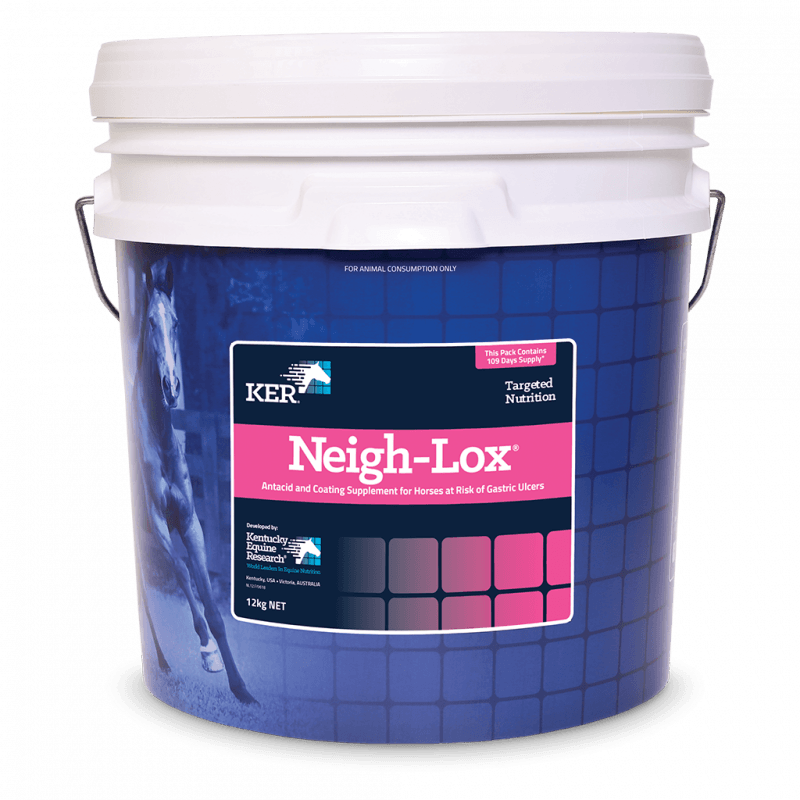 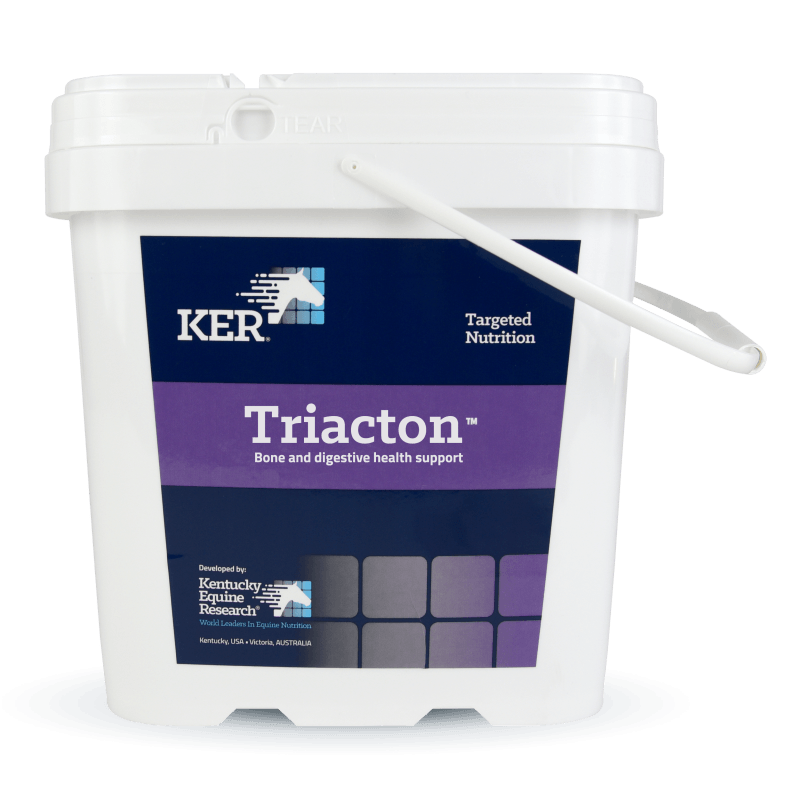 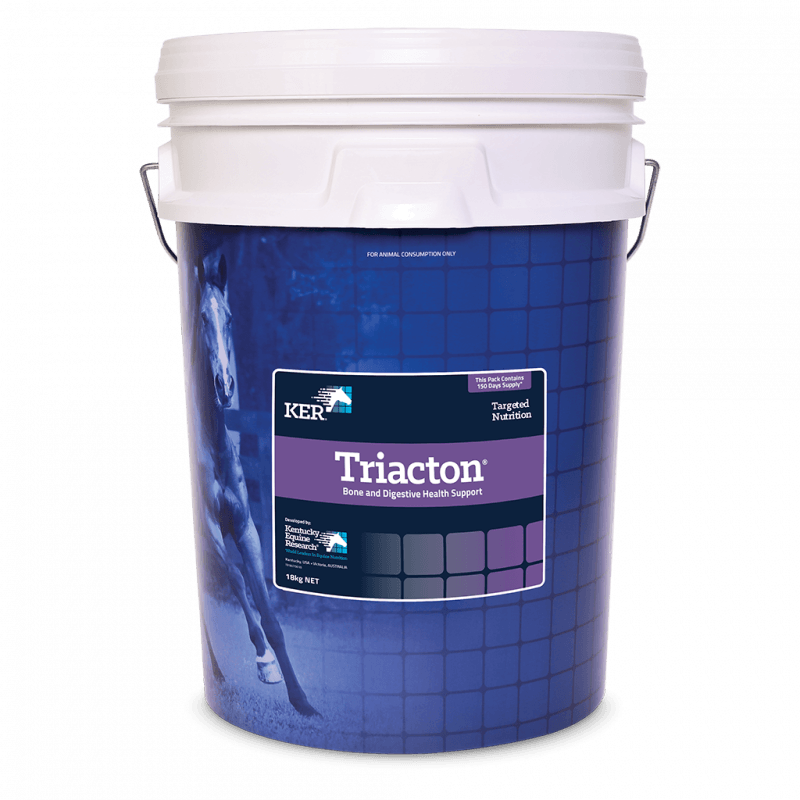