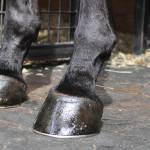 Horses often possess mismatched feet, and this asymmetry can sometimes be traced to clubfoot. The mechanical cause of clubfoot involves hyperflexion of the distal interphalangeal joint, the articulation between the short pastern bone and the coffin bone, due to shortening of the deep digital flexor tendon.

Externally, a clubfoot is typically characterized by its boxy, upright appearance, due in part to excessive heel growth. Compared to normal hooves, a clubfoot typically has less width through the hoof capsule.

Working in concert with a veterinarian, a skilled farrier is an incredible asset in dealing with a clubfoot. In severe cases, surgical intervention may be necessary.

Management of clubfoot depends largely on when the deformity is identified. Clubfoot has been observed in neonates but is most frequently recognized in foals and weanlings between two and eight months of age.1 Given the frequency of its development in young horses, horsemen believe there may be a genetic component to the deformity.

In a recent study, veterinary researchers investigated the incidence of clubfoot in 141 Arabians residing on eight different farms in Italy and the possible role of inbreeding in its expression.2 Researchers examined each horse’s hooves for clubfoot and reviewed extended pedigrees. If clubfoot was identified, the hoof was given a grade from 1 to 4, least to most severe. Management information of each farm was noted, including stabling, paddocks, nutrition, and hoof care. Differences in the average inbreeding coefficient between affected and healthy animals, between sexes, and between shod and unshod horses were calculated.

An inbreeding coefficient of an individual is the probability that two alleles at any locus in an individual are identical by descent from the common ancestor of the two parents.

Researchers found clubfoot in 38% of horses, 28 mares and 25 geldings or stallions. No differences between sexes, shoeing status, or environmental conditions were noted between affected and unaffected horses. Among the horses studied, “high inbreeding coefficients were observed, particularly in affected animals, suggesting that high inbreeding coefficients increase the probability that the disorder occurs,” said the researchers.

As mentioned before, clubfoot is generally managed through a competent and consistent hoof-care program. All horses require sound nutrition for optimal hoof health. “On top of a balanced ration, some horses require nutritional supplementation in the form of biotin and other hoof-building nutrients, like the amino acid methionine and the minerals iodine and zinc,” explained Catherine Whitehouse, M.S., a nutrition advisor for Kentucky Equine Research.

“If faced with thin, crumbly walls, unsightly cracking, or general weakness of the entire hoof structure, choose a research-proven hoof supplement,” she recommended.

1Hunt, R.J. 2012. Management of Clubfoot in Horses: Foals to Adults. In: Proceedings of American Association of Equine Practitioners 58:157-163.