Don’t Give Cattle Feeds to Horses! 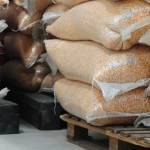 It’s generally okay for cattle and horses to eat grass together in a pasture, munch through similar, good-quality hay, and drink the same water. However, horses should not be given grain-based feeds designed for cattle. Even a small amount of some additives in cattle feeds can be fatal to horses, while other ingredients may not kill the horse but most likely won’t do it much good either.

Urea is a nonprotein nitrogen source commonly used in the diets of ruminant animals such as cattle. This feed ingredient provides nitrogen to the intestinal (ruminal) microflora for use in the synthesis of microbial protein, which may then be used to meet a significant portion of the ruminants’ protein requirement.

The arrangement of the horse’s gastrointestinal tract makes the use of urea questionable in terms of contributing to nitrogen requirements. Contrary to popular belief, horses are not extremely sensitive to urea and in fact show greater tolerance to urea than do ruminant animals. Some horses, especially mature horses on an all-forage diet and receiving marginal protein intake, can benefit from urea, though its use is not recommended. Urea should not be fed to young horses at all.

Urea is generally broken down in the horse’s stomach and small intestine and then is absorbed and excreted via the kidneys prior to the time it arrives in the cecum. Therefore, urea is not broken down to form carbon dioxide and ammonia, the latter of which causes toxicity to occur in the ruminant animal. This does not mean that urea is not potentially toxic to the horse. A study in which ponies were fed a diet consisting of 25% urea resulted in the death of the ponies. Signs attributed to urea toxicity in the horse are incoordination, wandering, and head-pressing (horses will press their heads against solid objects).

Cattle feeds may contain another ingredient that is dangerous for horses. Ionophores are antibiotic-like compounds used in ruminant diets to alter rumen fermentation. These compounds cause a shift in the volatile fatty acid (VFA) ratio that favors the production of propionate and reduces the molar percentage of acetic acid. The net result of the action of ionophores in ruminant diets is greater feed efficiency. The two most common ionophores used are monensin sodium (Rumensin) and lasalosid (Bovatec). Both of these ionophores are extremely toxic to the horse, so feeds containing ionophores should never be given to horses.

Levels of monensin sodium as low as 1 mg/kg of body weight have resulted in the death of horses. However the LD-50 (level at which 50 % of horses would be expected to die) is reported to be 2 to 3 mg/kg of body weight. This means that 50% of horses that consumed 1,000 mg of rumensin would be expected to die. The normal inclusion rate of rumensin in cattle feed is 3 to 5 grams per ton (3.3 to 5.5 ppm). This means that an average-sized horse would have to eat an enormous amount of a feedlot cattle ration for it to be toxic. Realistically, however, the true hazard with ionophores is errors by feed manufacturers, or with horses consuming pasture cattle supplements or poultry feed which could contain 400 and 100 ppm ionophores, respectively.

Affected horses show restlessness, colic, sweating, and incoordination and generally die within 12 to 36 hours of the onset of toxicity symptoms. Post-mortem examination shows severe damage to the cardiac (heart) muscle. In horses that have shown signs but recovered, cardiac damage may be serious enough to prevent a return to athletic performance.

Rumensin and other ionophores are frequently used in cattle feed as a coccidiostat, especially in the diets of replacement dairy heifers. Additionally, ionophores are used in poultry feeds to control coccidiosis. These facts and the extreme toxicity of ionophores to horses make feeding cattle feed or poultry feed to the horse risky. Many feed mills that make a significant amount of horse feed will not also make ionophore-containing feed due to the possibility of contaminating horse feeds and the potential for liability that exists.

The safest practice is to avoid giving feed products designed for one type of an animal to those of another type or species. Design feed storage areas so that it is impossible for animals to gain access to them. If feeds for horses are stored in the same area as feeds for other animals, be sure that containers are separated and are clearly marked as to what feeds they contain. Avoid using similar containers (identical plastic or metal garbage cans, bins, or other storage units) to hold feeds designed for different species. If any animal is accidentally given the wrong product, take the feed away as soon as possible and contact a veterinarian.

Information in this article was first published in “Feeding the Performance Horse,” Proceedings for the 1994 Kentucky Equine Research Short Course for Feed Manufacturers.