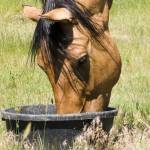 Some allergies are fairly common in horses, especially insect bite hypersensitivity and reactions to pollen and mold spores. Food allergies can occur in horses, but are quite rare.

“Because food allergies are not common in horses, clinical signs of food allergies have been extrapolated from other species and are thought to include hives, itchiness, and possible self-trauma due to scratching,” explains Bryan Waldridge, D.V.M., in-house veterinarian for Kentucky Equine Research.

There are two tests currently available for food allergy testing in horses: intradermal testing (known as a skin-prick test) and a blood test that measures a specific protein, or antibody, called immunoglobulin E. The basic idea is that a single blood sample taken from a horse is tested in a laboratory to see if the IgE “reacts” with certain food molecules, such as those found in protein-rich feeds like alfalfa (lucerne) and soybean. Other feeds that can potentially cause allergic reactions include corn, molasses, sugar beet, oats, rye, and barley.

In humans, approximately 50-60% of blood tests are false positives, meaning that the test gives a positive result when no allergy actually exists. Problems associated with the IgE blood test include:

Considering the poor reliability of IgE blood testing in other species together with the myriad of problems associated with IgE testing in general, one group of researchers critically evaluated that test in horses. They collected blood samples from 17 ponies at the start of the study and again 14 days later.

Horses that tested positive to the IgE blood test were then included in a “provocation test,” where they were offered 100 g of the food they were presumably allergic to twice daily in addition to a basic diet of hay and a vitamin/mineral supplement.

Key findings were that only seven ponies were negative at both day 0 and 14 and only one of the 17 ponies tested positive at both time points for the same food allergen. During the provocation test, no ponies were itchy, developed hives, or had any change in physical condition or blood work that suggested they had a food allergy, despite testing “positive” on the blood test.

The study authors concluded that inconsistent test results are misleading and “could lead to unnecessary or inappropriate changes in food management when eliminating the presumed food allergens from the daily ration.”