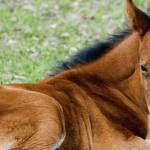 Horse breeders are sometimes faced with raising an orphan foal. Foals can become orphaned for several reasons including lack of milk production, poor mothering, mare death, and in some cases old mares have their foals removed after birth to avoid the stress of lactation. A number of options are used to raise orphan foals, and the course taken with an individual foal will depend upon a number of factors.

If the mare dies at birth, the foal must receive colostrum produced by another mare. Many breeding farms keep frozen colostrum from other mares for this purpose, and stores of frozen colostrum are also kept by veterinary clinics. The orphan foal is going to experience a great deal of stress regardless of how it is raised, and it is important that the foal receives plenty of antibodies via colostrum during the first hours of life. Foals orphaned at a very early age should ideally be placed on a foster mare, called a nurse mare, or receive an artificial milk substitute.

In an effort to be certain that newborn foals have received the full benefits from colostrum, many farms will take a blood sample from the foals between 12 and 24 hours after birth to have an IgG (immunoglobulin G) test done. If the foal has received the proper immunity from its dam’s colostrum, it will have an IgG count of 1,000 to 1,300.

If the test comes back with a low count of 100 or so, most farms will provide the foal with a plasma transfusion from a horse with strong immunity. However, even with this it is difficult to effect a change of more than 100 or 200 points, which goes to show that high-quality colostrum is essential for the health of the foal.

Milk ReplacerA common method for raising orphan foals is milk replacer. In recent years there has been significant development of foal-specific milk replacers designed to mimic the nutrient composition of mare’s milk, and many have additional fortification with trace minerals and vitamins. They are only good, however, if fed properly. Historically, the use of milk replacers was plagued with issues such as scours or upset stomachs. Carefully managing the amount and timing of the feedings helps to eliminate some of these problems. Using milk replacers is obviously more labor intensive than raising the foal on a nurse mare, and this can be a drawback for some breeders.

Foals normally suckle from the mare dozens of times each day and ingest relatively small quantities of milk during each nursing session. The digestive tract of a very young foal is simple and fairly undeveloped. After birth, the foal’s ability to absorb antibodies from its dam’s colostrum declines after 24 hours. The small intestine is permeable to protein for a brief period of usually under 36 hours. As the foal matures, its nutrient requirements change and its digestive tract matures.

Feeding large quantities of milk in a single meal especially to very young foals will overwhelm the digestive tract’s ability to process and absorb the sugars and protein in the milk and will lead to diarrhea and the pot-bellied appearance so often seen in foals fed milk replacer.

The trick to feeding milk replacer to young horses is to feed small amounts often from a bottle or bucket. Training a foal to drink from a bucket is surprisingly easy. Place a small amount of milk in the bucket so that the foal’s muzzle can easily touch the base. This contact with the base of the bucket elicits a suckle response, and the foal will usually drink quite happily. This method is significantly easier than a bottle. When starting a foal, no more than 1.5-2 litres of milk replacer should be offered at one time.

Studies at Kentucky Equine Research have shown that foals fed two quarts (1.9 litres) of milk replacer six times per day gained less weight than control foals during the first month of age. After one month, their weight and height gains were similar to control foals.

An interesting observation from this study was that every foal fed the milk replacer developed diarrhea at between seven and 14 days of age. This is the same period that suckling foals normally develop “foal heat” scours. Since these foals were not with their dams, the scouring was not caused by foal heat. Perhaps scouring at this age is related to a change in the gut pH and microflora. Treating the foals with probiotics (lactic acid bacteria) seemed to reduce the severity of scours, and the foals usually got over scours within two or three days without losing their appetites or developing a fever. If a scouring foal maintains its appetite and does not develop a fever, it is probably best not to treat it with antibiotics since treatment may further disrupt the gut microflora and prolong the problem.

Foals raised on milk replacer should be offered small amounts of high-quality creep feed beginning at two weeks of age. Intake should be gradually increased about 100 g (0.22 lb) per week until the foal is eating about 1.5 kg (3.3 lb) of feed per day at three months of age. At this point, the milk replacer intake can be reduced by one litre per day until the foal is completely weaned.

It is certainly possible to raise a healthy orphan foal, but particular care must be given to the changing nutritional needs of the foal. Too much milk can cause growth problems as can milk with inappropriate levels of nutrients. For foals being raised on milk replacer, it is essential to carefully monitor the amount and timing of feedings and to pay close attention to providing a balanced diet as the foal is weaned from the milk replacer.