The Changing Equine Silhouette: Equine Metabolic Syndrome Through the Decades 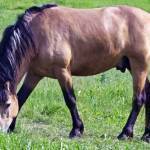 Would you believe that metabolic diseases were first recorded as long ago as 350 B.C.?

Pat Harris, a veterinarian and equine nutritionist with Waltham Equine Studies Group, documents that Aristotle referred to laminitis at that time as “barley disease,” presumably because it was associated with excessive consumption of grain. Over a thousand years later, in 900 A.D., laminitis was linked to multiple causes, including concussive work on hard ground, overeating, and drinking too much cold water following exertion. Interestingly, considering today’s connection between obesity and laminitis, this historical document recommended, among other palliatives, exercise and diet restriction as integral to the management strategy.

Harris recapitulated the history of equine metabolic syndrome (EMS) during a recent Kentucky Equine Research conference. Learn more about the origins of the disease in this Q&A.

The link between obesity and laminitis has been recognized for many centuries, but it was only in the 1980s that insulin was implicated. At that time, an alternative explanation, aside from their weight, was given for obese ponies being more susceptible to laminitis: obese ponies were less sensitive to insulin. Thus, a connection between insulin resistance and laminitis could be made.

This led to the terms pre-laminitic metabolic syndrome, peripheral Cushing’s syndrome, and equine metabolic syndrome (EMS). Australian researchers then showed that laminitis could be induced in ponies and horses through maintaining a high plasma insulin concentration. Interestingly, the pathology was different than that of other forms of laminitis, with stretching of the lamellar epithelial cells occurring within six hours of the hyperinsulinemia.

The term “equine metabolic syndrome” (EMS) became the most common description for the disease. In 2010, a consensus statement by a group of international researchers recommended the use of EMS to describe the phenotype of an animal with obesity and insulin resistance with a predisposition towards laminitis. The term was adopted in part because of the similarities with the human metabolic syndrome that was a collection of risk factors believed to predict the occurrence of coronary artery disease and type 2 diabetes mellitus in people. The panel of experts proposed that the EMS phenotype for the majority of affected equids should include:

The panel recognized that while “obesity is observed in the majority of cases, some affected equids have a leaner overall body condition and regional adiposity and others are normal in appearance.” They also recognized a variety of other hormone and systemic markers that might be linked with EMS and the risk of laminitis.

What has changed more recently?

A great deal of work has been undertaken and reported in the period between this initial consensus statement and today. This work has, for instance, suggested that horses with a body condition score of >7 (on the Henneke scale of 1-9) should be considered obese. Other work has shown that not all obese animals are insulin resistant—whether obese animals are insulin resistant or not may depend, at least in part, on the diet fed to induce the obesity and suggested that the risk of laminitis is a complex interaction between genetics and the environment. In fact, their response to an oral glucose/sugar may be one of the most important predictors of laminitis risk rather than tissue insulin resistance per se, leading to the increased use of the term insulin dysregulation defined as any combination of fasting hyperinsulinaemia, postprandial hyperinsulinaemia (response to oral sugar test or consumed feeds), or tissue insulin resistance.

This led to a subtle shift in the definition of EMS in 2016, as defined by the Equine Endocrinology Group, which included many of the researchers in the original consensus statement, to “a clinical syndrome associated with an increased risk of laminitis that includes insulin dysregulation and any combination of increased or regional adiposity, weight loss resistance, dyslipidemia, and altered adipokine concentrations.”

Where does this leave us?

First, equine obesity (defined here as the excessive or pathological accumulation of fat) is commonly found, especially in certain native breeds, and remains a major welfare issue due to a variety of associated adverse consequences, including orthopedic disease, hyperlipemia, hyperthermia, infertility, and poor performance. In general, it appears that body fat is likely to be greater than 20-25% of body mass in animals with BCS ≥ 7, and values of up to 47% have been measured in ponies.

One study on pasture-associated laminitis concluded that “overweight animals that develop laminitis tend to have more severe signs than those of optimal weight. When laminitis does occur, overweight animals are more likely to die of the disease than their thinner counterparts.” Recent gain in weight has been shown to be a risk factor for laminitis, and obesity also remains a risk factor for insulin dysregulation; therefore, obesity remains implicated in laminitis risk regardless of whether it is included in the core definition of EMS or not.

Second, if this definition is generally accepted going forward, EMS can only be diagnosed by demonstrating ID in the form of hyperinsulinaemia or abnormal insulin responses to oral or intravenous challenges. Third, it is important to realize that by definition all animals with EMS will be at increased risk of laminitis but for genetic, management, and environmental reasons, they may not all go onto develop clinical laminitis. Finally, the value of recognizing EMS is to enable individual animals with an increased risk of developing laminitis to be identified and to allow appropriate prevention strategies to be put into place.

From the aforementioned information, it becomes obvious that it is not possible to look at an individual animal and say that it has or does not have EMS, although practically the diagnosis of EMS will often be assumed when there is obesity and laminitis and the laminitis cannot be explained by other causes. Managing animals that are obese whether they have laminitis or not is necessary and should be implemented regardless of the results of any diagnostic test.

However, often diagnostic testing may be a very useful adjunct especially when discussing, for example, the risk of returning a laminitis-prone animal to pasture. Importantly, the value of using more dynamic tests is increasingly being recognized and work is ongoing to refine the protocols and the doses to use.

Increasingly, all the work being undertaken globally has meant that we have realized that the interpretation of any results needs to take into account dose, timing, and nature of any recent feeding, potential stressors, laboratory method used, season, breed, test-specific reference range, etc. Insulin concentrations measured using one type of assay, for example, may not be the same as found with another; results of the oral sugar test can vary considerably even in the same individual and therefore testing conditions need to be consistent and only appropriately large changes should be considered clinically relevant. Further information on current recommendations can be obtained from the ECEIM 2018 consensus statement and a recent current-perspectives roundtable publication.

This is an abridged version of our conversation with Dr. Harris. What else does she have to say about EMS? As it turns out, a lot! Check out the Kentucky Equine Research Conference 2018 Proceedings. A fully referenced, complete transcript of the Q&A is provided at this link.