The Young Years: Nutrition from Birth to Two Years of Age 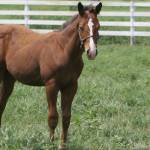 The nutritional requirements of horses change as they progress from foalhood to physical maturity. For certain individuals, physical maturity does not occur till they are four, five, or even six years old. Beginning with a liquid diet and ending with a diet that invariably contains both forages and concentrates represents a significant spectrum.

A foal’s first meal is usually colostrum, a yellowish, viscous fluid. Sometimes referred to as “first milk,” the composition of colostrum is much different than that of milk. Colostrum typically contains higher concentrations of protein and fat. Much of the increased protein can be attributed to increased levels of immunoglobulins. Certain immunoglobulins provide the foal with protection against environmental threats immediately after birth and stimulate the foal’s own immune system.

During the first few months of life, foals grow rapidly, quadrupling their weights by five months of age. Milk remains the staple of the young foal’s diet until it is nearing three months of age.

Though mare’s milk is usually a sufficient diet for the first three months of life, foals begin seeking out alternative sources of feed much sooner, often investigating feed intended for their dams.

Under normal management systems, it is unnecessary to supplement foals with concentrate until they reach 90 days of age. At this point, a properly fortified concentrate for growing horses should be introduced and gradually increased so that the foal’s daily concentrate intake is 1 lb (0.5 kg) per month of age. If mares consume their ration out of feed tubs or buckets that are also accessible to their foals, it is assumed that the foals consume a portion of the mares’ meal, and this is an acceptable practice.

Proper nutrient intake is vital during the weanling stage (5 to 12 months old) as the skeleton is most vulnerable to disease. Nutrition plays an important role in the pathogenesis of developmental orthopedic disease in horses as deficiencies, excesses, and imbalances of nutrients affect the incidence of physitis, angular limb deformity, and osteochondritis dissecans.

The most common feeding errors attributed to developmental orthopedic disease are excessive grain intake, feeding an inappropriate feed for the forage offered, and inadequate fortification. These three scenarios are easily rectified by feeding an appropriate grain mix fortified for the young, growing horse and feeding it at the correct intake.

Young horses already suffering from developmental orthopedic disease should have their energy intakes reduced while maintaining correct levels of protein, vitamins, and minerals.

In addition to excessive energy, the source of calories for young horses may also be important. Foals that experience an exaggerated and sustained increase in circulating glucose or insulin in response to a carbohydrate (concentrate) meal may be predisposed to osteochondritis dissecans. Results of a large field trial by Kentucky Equine Research (KER) using Thoroughbred weanlings suggested there was a connection between high glucose and insulin response to a concentrate meal and osteochondritis dissecans.

Plasma glucose and insulin two hours post-feeding were significantly higher in weanlings with osteochondritis dissecans than in unaffected foals. Insulin/glucose ratios, however, were not significantly different. Glycemic responses measured in the weanlings were highly correlated with each feed’s glycemic index, suggesting the glycemic index of a feed may play a role in the pathogenesis of osteochondritis dissecans. Elevated insulin levels, called hyperinsulinemia, may affect cartilage formation.  Based on the results of this study, young horses should be fed concentrates that produce low glycemic responses such as feeds in which a proportion of the energy is supplied by fat (vegetable oil and rice bran) and fermentable fiber sources (beet pulp and soy hulls).

Deficiency and/or excess of the minerals calcium, phosphorus, copper, and zinc may lead to developmental orthopedic disease. The ration of a growing horse should be properly fortified because commonly fed cereal grains and forages contain insufficient quantities of several important minerals. A ration of grass hay and oats would only supply about 40% and 70% of a weanling’s calcium and phosphorus requirement, respectively, and less than 40% of its requirement for zinc and copper.

The amount of supplementary concentrate required to maintain a desired growth rate varies, and it is important to feed each horse as an individual. Yearlings that are easy keepers should be prevented from becoming fat by being fed a low-intake, low-calorie source of essential protein, vitamins, and minerals. On the other hand, yearlings that are large-framed with much growth potential can consume normal amounts of fortified concentrate. Most types of developmental orthopedic disease are unlikely to arise after 12 months of age. Lesions that become clinically relevant at this age have typically formed at a younger age; nevertheless, correct nutrient balance is important in the growing yearling.

With an eye toward long-term health and soundness, breeders should strive for steady, even growth.  It is often necessary, however, to yield to economic considerations when preparing horses for sales and shows.  A pattern of slow early growth is more appropriate for foals that will not be sold or shown as yearlings. Delaying rapid growth until after the window of vulnerability for development of bone disease (less than 12 months of age) significantly reduces the risk of growth-related developmental orthopedic disease. Foals that are later-born and pointed toward sales or shows in late fall could follow a more moderate growth curve. This growth pattern is used by most breeders of Thoroughbreds because it results in large, well-grown yearlings with minimal joint problems.

A rapid growth curve, in which weight gain is concentrated over a short period of time, is used for later-born foals targeted at earlier sales and shows. This growth pattern is most likely to result in skeletal problems, but can result in more mature yearlings earlier in the season if they are properly managed. Rapid growth can be managed somewhat by spreading the growth over several months rather than trying to achieve weight gain during the traditional sale or show preparation period of 60-90 days before a sale.

Ongoing research suggests a relationship between the glycemic nature of feed and the incidence of skeletal problems in young horses. Diets high in starch and sugar (typical grain-based concentrates) produce a large blood glucose and insulin response after feeding and have been implicated in the etiology of developmental orthopedic disease. This, in addition to the aforementioned work on hyperinsulinemia in weanlings, indicates that it may be beneficial to replace a significant portion of the energy normally supplied by cereal grain with fat and fermentable fiber to reduce the glycemic response to concentrates.

Proper nutrition of young horses provides the foundation for future soundness and longevity in sport, so its importance in the management of young horses cannot be overemphasized.