An Introduction to Coenzyme Q10 for Athletic Horses 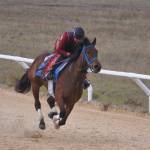 In today’s fast-paced competition world, horses must rebound quickly between performances. With an eye on expediting recovery, horse owners frequently turn to nutrition, and many find supplementation with research-proven antioxidants essential. A newcomer on the antioxidant scene, and one gaining more popularity among horsemen, is coenzyme Q10. Unfamiliar with coenzyme Q10? Read on.

What is coenzyme Q10? Coenzyme Q10 plays an essential role in the production of cellular energy, specifically acting as electron-transfer agents in the mitochondria. Further, coenzyme Q10 serves as an efficient antioxidant and is capable of recycling and revitalizing other antioxidants, such as vitamins E and C.

Why is coenzyme Q10 sometimes called ubiquinone? Coenzyme Q10 and ubiquinone are one and the same. When the compound was identified in the late 1950s, it was coined coenzyme Q10, due to its chemical structure. Its official name, ubiquinone, was bestowed upon it in 1975 by the commission that governs biochemical nomenclature. The name ubiquinone was derived from the adjective ubiquitous, a nod to the compound’s widespread distribution in nature.

Why isn’t coenzyme Q10 considered a vitamin? By definition, vitamins must be consumed, even if only in minute amounts, to sustain life. Coenzyme Q10 is synthesized in all body tissues and therefore cannot be considered a genuine vitamin.

What were the results of this initial study? The researchers found that serum of horses contained coenzyme Q10 but at a much lower concentration than humans and several other species. When orally supplemented with 800 mg of powdered coenzyme Q10, an increase of approximately 2.7-fold at 60 days was measured.

“There’s an issue in Thoroughbred racehorses that seems to be associated with high levels of a specific enzyme in the blood called GGT” said Joe Pagan, Ph.D., president of Kentucky Equine Research. “We have some theories on what might cause this in certain horses—we think it may be related to oxidative stress—and it seems Nano-Q10 may be effective in reducing some of the problems we’re seeing. Preliminary research with our racehorses in Florida suggests that horses with higher serum CoQ10 have lower GGT.”