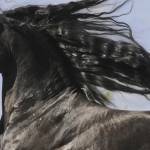 With their jet-black coats, flowing manes, and high-stepping gaits, Friesian horses have become favorites for those who want to ride or drive a spectacular, eye-catching equine. Originating in the Netherlands and combining the better qualities of primitive forest horses and possibly some Andalusian blood, Friesians are prized for their strength, grace, and athleticism.

When a registry was created in 1879, breeders wanted to preserve these traits, and the horses have been closely inbred. This practice has produced outstanding horses, but has also allowed some genetic weaknesses to surface. Breeders, owners, and veterinarians will be more successful in managing Friesians if they keep these defects in mind.

Veterinarians at Utrecht University’s College of Veterinary Medicine in the Netherlands and Ghent University’s College of Veterinary Medicine in Belgium have documented problems that have been seen in a disproportionate number of Friesian horses. The defects have been found in the skeletal, circulatory, and digestive systems. The immune system and skin are subject to problems as well. Abnormal structure and function of collagen, the protein-based connective fibrils in skeletal and soft tissue, may be related to many of these defects.

Dwarfism produces Friesians foals with severely stunted leg growth, though their heads and bodies approach normal size. These individuals also show hyperflexion of the fetlocks and long, narrow hooves. In the past, dwarf Friesian mares were often used as broodmares. This practice is no longer allowed if an animal is to be registered, but the genes for dwarfism have become widespread.

Studies have found excessive laxity of tendons and ligaments in dwarf Friesians compared to other pony breeds. Normal Friesians have tendon and ligament stretch properties in between those of dwarfs and normal ponies. It has been suggested that the high-stepping gaits of the Friesian are caused by this increased laxity which affects weight-bearing in the limb joints. Thus, the collagen-linked disorders common to these horses may actually be the factor that produces their showy way of going.

Another malformation seen in about 2.5 foals per 1,000 births is hydrocephalus, an abnormal and usually fatal accumulation of cerebrospinal fluid within the skull. This may be related to another collagen-linked defect that allows a malformation of the jugular foramen, leading to compression of the jugular vein and disturbing fluid movement.

Megaesophagus, a chronic dilation of the esophagus, is directly related to the collagen abnormality found in Friesian horses. The condition is related to weak muscle tone and low contractile ability in the wall of the esophagus. Affected horses show loss of appetite, salivation, muscle wasting, mild colic, and esophageal obstruction that may lead to aspiration and pneumonia. Records of horses seen because of megaesophagus at a veterinary clinic showed that of 45 cases, 41 were in Friesians. Researchers studying the cases noted a familial predisposition among affected horses, strongly suggesting that this condition may be hereditary.

Weakened immune systems have been blamed for the higher occurrence of some problems that do not show up as often in other breeds. Retained placentas are reported in more than half of Friesian broodmares compared to 2 to 10% in the general equine population. Insect bite hypersensitivity is seen in twice as many Friesians as Shetland ponies in the Netherlands. This condition, which causes intense itching, skin damage, and hair loss on the mane, tail, head, and midline of the abdomen, may be so severe that affected horses may be unusable for weeks or months during the summer fly season. Treatment with antihistamines, anti-inflammatory drugs, corticosteroids, and insect repellents can relieve discomfort but does not cure the condition.

Many Friesians suffer from chronic dermatitis that causes thickened and ulcerated skin on the pasterns. The lesions are often unresponsive to treatment. Though other draft breeds also have this problem, Friesians are overrepresented, and a genetic cause is suspected but has not been proven.

Rupture of the aorta is found in many breeds, but in most horses, the rupture occurs at the aortic root where the aorta leaves the heart. Affected horses spill blood into the pericardial sac, the tissue layer that surrounds the heart, and pressure rapidly compresses the heart so that it cannot continue to beat. Death usually occurs very quickly after the rupture occurs. In Friesians, however, the site of aortic rupture is almost always at the aortic arch where the artery turns to descend through the body. This unique location suggests a genetic or breed-specific factor. The tear is often fairly small and blood leaks into the tissue surrounding the aorta. Swelling produces pressure that reduces the bleeding, allowing the horse to remain stable for long periods. Examination of affected horses shows an increased resting and working heart beat, poor performance, intermittent lameness, and swelling through the chest and ventral abdomen. After some time, the rupture usually becomes larger and the horse will die.

In other Friesians, aortic rupture leads to an aortopulmonary fistula that allows blood to leak from the aorta to the lungs. Blood slowly accumulates from the increased flow over a period of weeks or months, and affected horses may develop a dry cough, poor performance, swelling of the chest and legs, and intermittent fever, colic, and lameness. The signs may be mistaken for other problems, especially because they often occur in young (average age of aortic rupture is four years) and otherwise healthy horses. Owners and veterinarians should be aware that, in Friesians, aortic rupture is a possible cause. These horses should be eliminated from the breeding population to help in decreasing the number of affected animals.