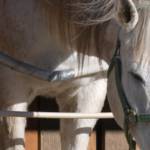 Potassium is an electrolyte necessary for proper muscle function. Along with other electrolytes such as sodium and calcium, potassium plays an important role in normal muscle contraction and relaxation. However, when potassium concentration in the bloodstream gets too high, a condition known as hyperkalemia, it can be life-threatening.

In healthy horses, the kidneys filter out excess potassium from circulation, which is then excreted through the urine. When the kidneys fail to clear potassium, or when too much potassium moves from inside to outside of cells, hyperkalemia can result. Abnormally high concentration of potassium in the blood causes muscles to contract more than they should, resulting in cramping and irregular heartbeat. At a greater risk of hyperkalemia are horses with a history of hyperkalemic periodic paralysis (HYPP), compromised kidney function, or massive cellular destruction, such as after trauma, burns, or a severe episode of tying-up.

Classic signs of hyperkalemia include muscle weakness, trembling, depression, and lethargy. While these symptoms are fairly general, when accompanied by changes in cardiac rhythm, hyperkalemia should be suspected. Cardiac changes are not always present in cases of hyperkalemia, so the absence of cardiac abnormalities should not rule out such a diagnosis.

Langdon Fielding, D.V.M., discussed treatment of hyperkalemia at the 2016 American Association of Equine Practitioners Convention in Orlando, Florida*. Intravenous (IV) calcium borogluconate (23%) in a five-liter bag of isotonic fluids is one treatment option. Administering calcium-containing fluid will not reduce plasma potassium concentration, but it can help protect the heart muscle against the negative effects of excessive potassium.

The intravenous administration of dextrose (sugar) increases insulin concentration naturally. Insulin shifts potassium from outside to inside of the cell, consequently decreasing its concentration in circulation. Insulin itself can be administered intravenously in conjunction with dextrose, but Fielding noted that this technique should only be used when blood glucose can be closely monitored due to other risk factors.

Beta agonists are a class of drugs that relax airway muscles. Like insulin, beta agonists drive potassium inside of cells. However, research is needed in horses as most of the relevant research on this topic has been conducted in other species. Diuretics may be administered to help increase the excretion of potassium in urine, though diuretics should not be given to dehydrated horses.

Finally, sodium bicarbonate had previously been recommended to treat hyperkalemia, but clinical trials have shown little to no benefit, and should not be a primary treatment.

Recognizing hyperkalemia can be a challenge. The horse’s health history is an important consideration, and if hyperkalemia is suspected, treatment should be initiated as soon as possible, with the horse monitored for signs of improvement.