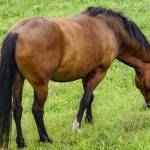 “Contrary to what one group of veterinary researchers hypothesized, bromocriptine actually decreased insulin sensitivity in this study. Because of this, the medication does not appear to have the complete desired effect in horses with insulin dysregulation,” explained Kathleen Crandell, Ph.D., a Kentucky Equine Research nutritionist.

Insulin dysregulation, characterized by elevated circulating insulin levels usually in conjunction with high blood sugar levels, is a central feature of equine metabolic syndrome (EMS). This syndrome is highly relevant in equine practice because horses with insulin dysregulation and EMS are at risk of developing laminitis, a serious medical condition that frequently results in loss of use and even euthanasia.

For the study, 15 mature mares were recruited and underwent an oral sugar test. Eight of the horses had insulin dysregulation and seven did not. All horses were treated with bromocriptine (0.1 mg/kg via intramuscular injection) once every three days for 14 days. After the treatment period, all horses underwent a combined glucose-insulin tolerance test (a standard dynamic test for ID) as well as a feed challenge to evaluate the horses’ glucose and insulin responses. Those responses were compared to values measured at baseline, prior to bromocriptine administration.

Despite this unexpected result, though, horses treated with bromocriptine did have some positive responses, namely an increase in adiponectin concentrations and a lower insulin response after a high-starch meal.

“Both of these results are beneficial, as adiponectin is involved in regulating glucose levels and insulin action. It is typically low in obese and insulin-resistant individuals, so an increase in concentration should help with energy regulation. The fact that insulin sensitivity increased with bromocriptine administration in light of an increase in adiponectin indicates that glucose and insulin regulation may somehow be different in horses than in humans who responded positively to this medication,” Crandell noted.

In addition, horses treated with bromocriptine had a voluntary and significant decrease in grain intake but an increased hay intake, suggesting this medication might alter feed preferences in horses, directing them away from the more calorie-dense feeds.

Without effective medication, horses with insulin dysregulation and EMS are typically managed with diet and exercise.

“The dietary recommendations for horses with insulin dysregulation and EMS are to feed primarily a low-nonstructural carbohydrate (<12%), forage-based diet with a ration balancer or  vitamin and mineral supplement and eliminate high-starch concentrates.”